Home » The physics behind tennis|Spin Effect
Spread the love

We have always heard the term spin in tennis and how some tennis racquets have a spin effect on the ball. This blog’s entry will try to clarify the physical property after the technique of spinning shots. 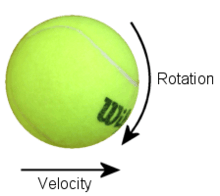 Spin is a property of a ball that rotates as it is moving in a specific direction (see Magnus effect). Topspin on a tennis ball propelled through the air  imparts a downward force that causes the ball to dive on the other side of the court, due to its interaction with the air. The opposite effect would be backspin, where the forces make the ball go up or in the direction of the ball’s rotation, that’s why balls can be curved by a pitcher in baseball.

In tennis topspin effect allows the player to hit the ball higher bending the line of the ball playing at the opponent’s feet. It is performed by angling the face of the racquet down and hitting the ball from below and brushing it upwards while accelerating the hit. Some racquets like the Wilson Pro Staff 97LS, the Blade 98S or the Prince Warrior 100T ESP with a extreme 14m x 16x string pattern among others,  are designed with spin effect by making a wider string pattern, this lets the string bed deflects more and gives the ball added RPM. These are the so called control racquets whose power comes from the player’s arm, thus more energy and resistance are needed to keep a steady game without tiring soon. 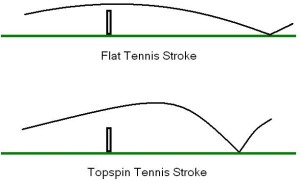 Hitting topspin shots is very effective as the ball spins forward and descends over the net towards the ground, so it can be hit with more force compared to another type of shot. It also makes the ball bounce higher. As a result, it is often used on clay or “soft” court surfaces in order to make the ball harder for the opponent to hit.

Here’s a video that perfectly illustrates how spining a ball affects its traveling direction.

Start practicing and improve your technique with the right gear for the job. Visit us and demo our racquets and see for yourself which racquet suits your game.

Tennis Plaza
We Serve Your Game!

Tennis Plaza’s Midtown Miami and Ft Lauderda...
What’s your playlist, pro?
What Serves Your Passion?
4 Steps to take your game to the next level