Home » Grunt Allowed! Grunting in Tennis can Affect Your Game

[Grunt:
to utter the deep, guttural sound in your throat and nose at the same time] 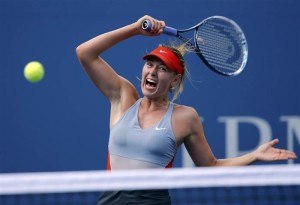 If an animal such as a pig grunts, it makes a low sound or you grunt when you say something using low short sounds, especially when you don’t want to talk. But what’s up with grunting when performing at a sport? In martial arts, fighters grunt for different reasons. One is to intimidate the opponent and because in traditional oriental philosophy grunting is the way to liberate the inner energy that’s transferred  to the punch. Let’s switch sports (pretend you  are Maria Sharapova) and make that punch the point when you hit the ball with a tennis racquet. The brain and the bio-mechanical machinery react in fractions of a second. You grunt and your core muscles contract stabilizing your body letting you transfer the energy more effectively  to the ball, increasing its speed. Research studies say that also “The velocity, force, and peak muscle activity during tennis serves and forehand strokes are significantly enhanced when athletes are allowed to grunt”*. For a tennis player returning a service is a multi-sensorial chain-reaction and studies have indicated that when two objects hit, the sound of the collision  is necessary to the perception of the items bouncing off each other so the brain can calculate the position of the ball in space therefore, when a loud grunt masks this sound an opponent reaction is delayed making him or her lose distance to the ball.

The University of Hawaii at Manoa (Honolulu) carried out a research project where thirty three recreational tennis players were put to test using video cameras and specialized software in order to analyse how grunting could take this effect at increasing ball’s speed, delaying reaction and affecting accuracy. The results  show that “when an additional sound occurs at the same times as when the ball is struck, participants are significantly slower (21-33 ms) and make significant more decision errors (3-4%) regarding the direction of the ball both for easy and hard decisions alike”** More questions arouse from the investigation that have to be looked into more carefully.

Ii would be great to include professional tour players in the research to see if those results still stand on a real scenario.

*NCBI, The effects of “grunting” on serve and forehand velocity in collegiate tennis players, http://www.ncbi.nlm.nih.gov/pubmed/24983852

** Plos One, a preliminary investigation regarding the effect of tennis grunting: does white noise during a tennis shot have a negative impact on the shot perception? http://journals.plos.org/plosone/article?id=10.1371/journal.pone.0013148#s3

We Serve Your Game!

How to Choose Your Tennis Racquet
Tennis Strings.This is How You Should Buy
Revealing the new Babolat Pure Aero 2016.
Inside the golden player | Sport psychology.