This has been a month of tennis gear releases. New Pro Staff design by Federer, re-shaped frame geometry on Babolat’s Pure Strike, new anti-vibration technology for Volkl’s handles and Djokovic’s  frame made better with a touch of speed for the pro. 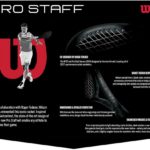 Wilson’s been cooking their Pro Staff family along with direct feedback from the man himself, Roger Federer. The idea behind the design of the Pro Staff 97 RF frame, spec-wise is that Roger could stop by any tennis pro shop and get a ready-to-play racquet. No doubt this is the racquet Federer uses every time and for 2017 Wilson invited Roger again to redesign the looks of his own winning weapon, coming up with a completely clean and elegant frame that resembles his boldness and drive on the court. Clean lines and an incredible feel with a rubberized paint that creates a soft, velvety  feel. This’s a player’s racquet ideal for  advanced precision and pop, despite being too heavy for some this is the best suited frame to add pace and precision to your game. For those in need of lighter frames and easy access to spin, including Dimitrov’s spin targeted frame,  Pro Staff offers a complete display of racquets based on a kevlar+graphite matrix which makes Pro Staff simply one of the best control-oriented tennis racquet family.

The runner-up for 2017 is with no hint of doubt the new Pure Strike from Babolat. A family of three frames, each made for a specific 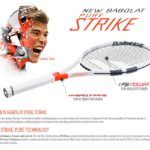 kinof player, sharing a unique hybrid frame design that allows for incredible stability and torsion control on big shorts. Another control-oriented racquets that’s been selling like hotcakes since its release early this month. Suited for the advance player in mind, this family offers a 100 sq. inch and a 98 sq. inch head variation giving a more open sweet spot for a responsive feel when hitting the ball on the rise, redirecting using the ball speed from your opponent, while providing precision. These are the 16 x 19 tennis racquets created by Babolat for precision and maneuverability with less effort. 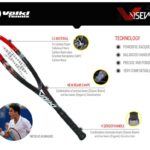 The German corporation brings for 2017 the well known German Engineering to courts. An active vibration dampening system called V-Sense provides unmatched feel and increased dampening by letting the handle swing against the initial vibrations. You can see how German this frame is and how Volkl has set a high bar for racquet technology. The new V-Sense collection is made for intermediate to advanced players with moderate swing that still need the the power pop of the frame without sacrificing control and accuracy. An impressive frame know by true tennis wackos. A bit of trivia here, these racquets were used by Michael Stich, Sergi Bruguera and the current number one Novak Djokovic’s coach, Boris Becker, among others. A worth try racquet that you can demo from our web site Tennis Plaza.com.

Last but not least is Djokovic’s premier racquet. The new Head Touch Speed has been redesigned from a geometry stand-point, bringing
the most wining frame in 2016 to play at the highest stages of tennis elite. No wonder it’s helped current # 1 ATP champion win nearly 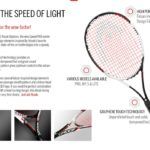 every known tournament there is. For 2017 the Falcon’s inspired the design elements of this state of the art speedy racquet. Incredible touch, solid dampened feel and great sound in a family that offers optimum control to advanced tournament players. Good news is that you don’t need to be Novak but if you want to follow his steps,  Head has created Touch Speed frames that target a broad selection of players from intermediate level with more forgiving performances to top tour winners who can’t let opportunities on court to slip out.

Check our web demo program to have the chance to try every new release, here’s how:

Find all your favorite gear here at Tennis Plaza.com

What Are Tennis Racquets Made Of?
What Serves Your Passion?
What’s your playlist, pro?
The Pro Staff 2017- Racquet Design Reinvented